Birds of Passage and Twists of Fate

My immediate family immigrated to the United States from Molfetta, Italy, in the early 1970s.  Since my father arrived via JFK Airport rather than through Ellis Island, I grew up assuming that I had no personal connection to the immigrant experience exemplified by weeks of steerage travel and chalk marked clothing.  In short, I was 100% wrong.  However, in the process, I learned some of the most important lessons of family history research, such as:
Male Italian immigrants of the early 1900s were frequently referred to as "birds of passage" since they often never settled permanently in their destinations.  Rather, they sought work, saved their earnings, and then returned home to their families.  Well, before long, I learned that I had an ancestor that came to the U.S. three, perhaps even four times, in the decade preceding 1913.

Ignazio De Gennaro is pictured in the above photo circa 1930 with his wife Mariantonia Petruzzella.  He is my great-grandfather, or to be more exact, my mother's mother's father.  His earliest documented arrival in the U.S. that I've found was on June 24, 1906.  He arrived with his brother Mauro with the goal of staying with cousins in Brooklyn, according to the ship manifest.  However, there is another important question on the manifest...

Well, Ignazio responded with while Mauro stated  .   Sadly, I have not been able to locate any official records of these supposed earlier arrivals.  However, I have officially confirmed that Ignazio went through Ellis Island once more on  March 26, 1909 and then again on September 29, 1913.  What I find particularly interesting is that Ignazio left Mariantonia with another new born each time he left.  (Insert your comic innuendo of choice here.)  All kidding aside, I try to imagine how difficult it must have been for him to leave his family behind, each time unsure whether he'd ever see them again.  This must have been particularly difficult during his last trip.

According to family lore, his goal was to bring his wife and children to the U.S.  By 1913, Ignazio's youngest sister, Chiara, had settled to raise a family in Hoboken, NJ, with her husband, Giuseppe Gaudio.  Several of Ignazio's brothers were also still making repeated trips to Hoboken in search of work.  Therefore, it's quite possible that Ignazio did in fact plan to have his entire family join him too.  In fact, the following photo of my grandmother, Maria Vincenza (Ignazio's daughter), was allegedly taken for her passport around age 4 circa 1913.

Ignazio's plans were thwarted by a modest, little event called World War I which began during the summer of 1914.  Ignazio had to stay in Hoboken at least through the fall of 1918 as indicated on his World War I Alien Registration Card (below).  It's unclear as to why Ignazio abandoned his plans after the end of the war and returned to Molfetta.  Perhaps he became disillusioned with America.  Perhaps he was merely homesick, or maybe his wife became wary of the dangers of ship travel.  We may never know.

I am perpetually amazed by how events ripple through time to affect the fate of generations.  For instance, had Ignazio's plan to import his family to America come to fruition, I would simply not exist...So, for those who may have tired of me already, who knew that World War I could seem even worse?
Posted by Damian De Virgilio at 7:00 PM 11 comments:

I've played with the idea of creating a blog related to my interest in genealogy since I started exploring the subject more seriously about three years ago.  I've avoided it mainly for fear that it would be a vain, self-indulgent effort that would have very little value.  However, earlier this month, I attended the RootsTech conference, and my perspective changed drastically.  There I learned that though I am not a genealogy expert I need to do my part to nurture this precious, emotional pursuit.  It's done a lot for me, and by sharing my successes, failures, and whatever knowledge I've gained, I hope others as well as I might gain at least a little...If not, perhaps this "vain, self-indulgent effort" might serve as good cousin bait.

I am particularly concerned about the state of Italian genealogy.  Please don't get me wrong...There are many passionate, knowledgeable people out there dedicated to the field.  Some of these individuals can be found via the links along the right.  However, as I've become more involved in the broader genealogy community, I can't help but feel that individuals of Italian descent are underrepresented when it comes to shaping genealogy's future.  Therefore, I also hope to do my part to change that.

I've chosen to launch this blog on a very symbolic day for me, February 12.  In fact, it represents the main reason I began exploring genealogy in the first place.  Like many first born males of Italian descent, I was named after my parternal nonno (grandfather), Damiano De Virgilio.  Even as I was growing up, his disappearance while serving in the Italian army during World War II cast a very long shadow over the lives of my immediate family.  All we knew was that he was taken prisoner by the Germans in Rhodes after the Italian armistice of September 8, 1943.  After that, his fate was a complete mystery. 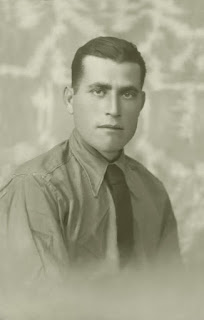 Carrying his name made me feel that I had an obligation to uncover the truth despite the logistical and bureaucratic hurdles.  In the end, I discovered the truth about the forgotten Oria shipwreck off the coast of Greece where over 4,000 Italian prisoners of war perished on February 12, 1944.

When I started, I never anticipated that the process would also teach me incredible lessons in the power of the internet, social media, and collaboration across boundaries of language and geography.  Abigail Pfeiffer eloquently recounts the struggle and successes in one of her blog posts, and Salvatore Rossetti has created a site to help honor our lost family members.  There are so many to thank and recognize in this still evolving epic where we continue to work to inform all family members of victims, ensure that the lost are properly memorialized, and engage authorities to help protect human remains and artifacts from vandals. However, I would be doing a major disservice if I did not acknowledge Aristotelis Zervoudis.  If it wasn't for him, none of this would have been possible.

Most recently, RAI TV has produced several pieces on the Oria.  This following video has English subtitles.


Earlier this week, a fellow grandson of one of the fallen, Michele Ghirardelli, was interviewed on an Italian talk show.


In future posts, I will discuss various aspects of our efforts from a genealogical perspective, but for today, I do my small part in honoring my Nonno Damiano, his fellow lost, and all those who continue to work to ensure that their memory lives on.
Posted by Damian De Virgilio at 12:00 PM 10 comments:

As I explained in my initial blog post , my interest in genealogy was sparked by a desire to learn the fate of my paternal grandfather, Dami...